Tomatillos, also known as green tomatoes or even shortened to ‘tomate’ are native to Mexico and unlike its lookalike tomatoes, is classed as a vegetable and not a fruit, because its nutritional profile is much different than that of regular tomatoes.

Historically tomatillos have been used to treat arthritis, joint and muscle conditions, which we now know is due to over 14 phytochemicals found in this vegetable.

What are phytochemicals? The word ‘phyto’ in Greek means plant, so it wouldn’t surprise you to know that phytochemicals are of plant origin. These chemicals assist in plant growth as well as acting as a defense system to protect the plant against pathogens, predators or even other competitors. Phytochemicals are becoming increasingly popular in the world of research due to the potential health effects that are still to be discovered, from the 25,000 phytochemicals that are known today. You will find most phytochemicals concentrated in the colorful parts of the plants such as in fruits, nuts, legumes, grains, and vegetables such as tomatillo.

In particular Tomatillos contain a unique phytochemical called withanolide which has extensive anti-inflammatory and analgesic effects. Withanolides are naturally occurring plant chemicals that feature antioxidant properties and suppress oxidative stress caused by free radicals, which are the harmful to the body and can cause damage and inflammation to the body cells.  As well as the plant chemical withanolides, tomatillos also contain vitamin A and vitamin C which collectively have anti-inflammatory, antioxidant and antibacterial functions, as well as promoting faster cell regeneration. For this reason, tomatillios have been found to be helpful with inflammatory conditions such as reducing pain and discomfort in joints, boosting the immune system, reducing sore throats and even cancer-protective effects!

Traditionally not only have the withanolides from tomatillos been used to treat health conditions, but have been used for over 3000 years in Ayurvedic medicine for medical uses, reducing symptoms in conditions of inflammation mediated diseases such as arthritis, autoimmune diseases, cancer, neurodegenerative disorders. The benefits of withanoildes are mainly due to its anti-inflammatory, diuretic, analgesic, immune boosting and stress reducing effects.

When choosing the best tomatillos, you may find them in husks. If the husks are still green, they have not achieved their full ripeness.  As the plant grows the husk will develop into a light brown color to indicate its ripeness, and in some cases may fall off. So, look for a light brown husk, or even husk free and ensure it has a bright green color and is firm in touch. 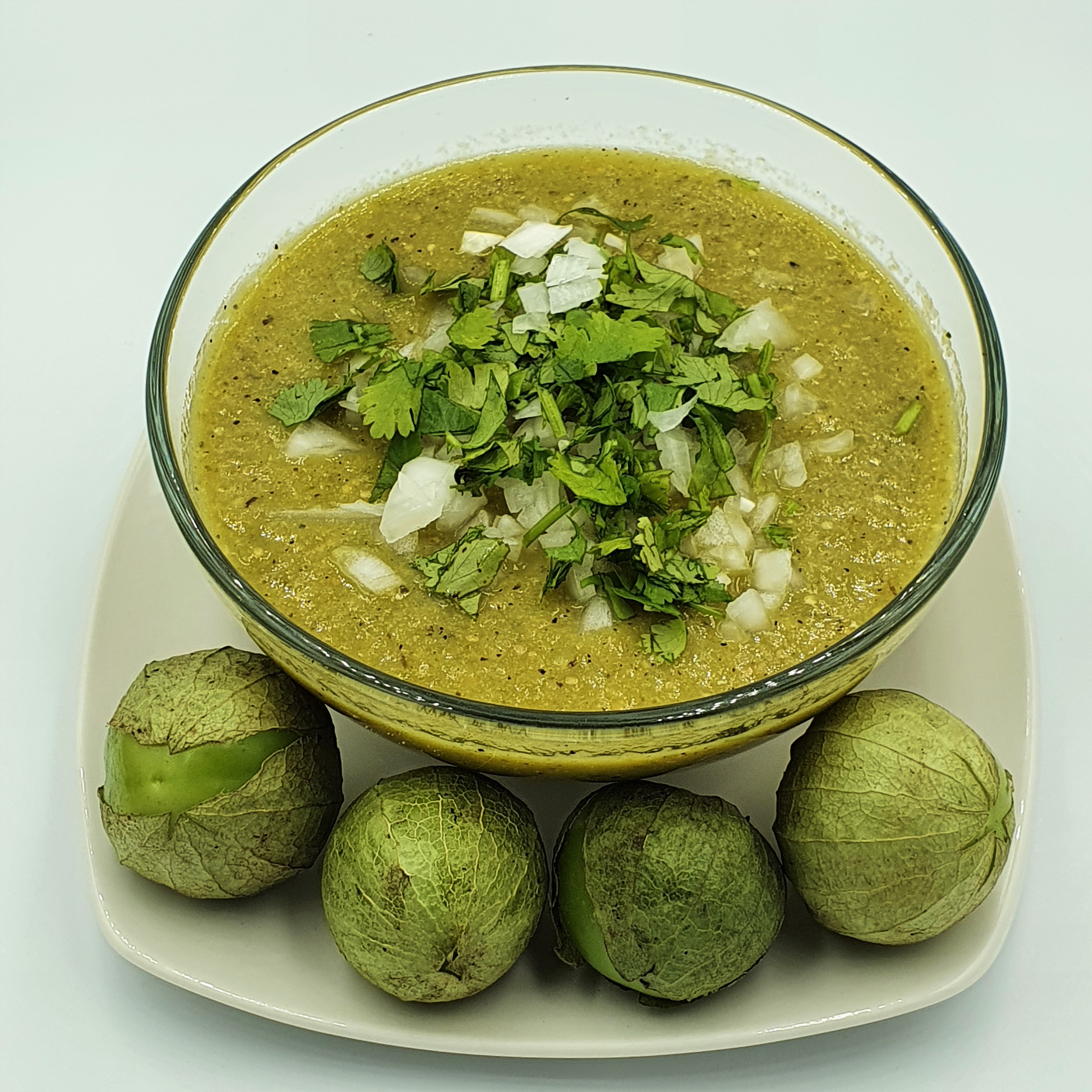 I am sharing with you, this traditional Mexican family recipe from my mother in law Elena, which is loved by the whole family!

Keep the vegetables whole and use a fry pan to dry roast the tomatillos, chilies and garlic, as to brown the sides, but be careful not to burn anything.

Place the roasted items into a blender and add in the dry chicken or vegetable stock, to a well-mixed liquid consistency.

Remove the salsa from the blender and top with chopped onion and cilantro.

Use this salsa to top your favorite chicken, fish or egg dish, or simply have with fresh corn chips as a great dipping salsa!