The mighty, the great Yaca or as you may know it – the Jackfruit. This fruit is the largest tree fruit in the world with some weighing up to 45kg (100lbs)! Now is the season for Yaca with most being harvested in October to November, so go ahead and have a taste.

If you haven’t tried it yet, be sure to give it a go as it is grown in abundance here in Mexico. It is said to have a sweet and fruity flavor, like mango, pineapple, banana, or apple, but I think it taste like a combination of them all!

Yaca has many health benefits ranging from helping with bowel health, skin issues, blood pressure, blood sugars to immune health. However, what it is becoming increasingly popular is its use as a meat substitute for vegans and vegetarians, mainly due to its meat-like texture and high protein content when compared to other fruits.

Why is protein so important especially for vegans and vegetarians? Proteins from foods are the building blocks of life and are required by every cell in the human body. Protein aids in repairing and making new cells for the body as well as supporting growth and development especially for children, teenagers, and pregnant women. The structure of protein is a chain of amino acids, which when consumed breaks down food into amino acids during digestion. These amino acids are important as the body requires a certain amount of these to maintain health and wellbeing.

In fact, your body requires 20 different amino acids.  You may be interested to know that 11 of these can be created by our bodies and that is why we call these ‘non-essential amino acids’. However, it is important that the remaining 9 amino acids come from the food we eat and thus are called essential amino acids. As you know, we get protein from animal products such as meat, eggs and dairy. These sources of protein are complete proteins which means that they contain the 9 essential amino acids our bodies need.  When following dietary practices that avoid or are low in animal products, the protein intake for that person is hugely reduced because the majority of the easily accessible complete protein in the diet comes from meat and animal-based foods. However, plant proteins can form complete proteins too in the form of beans, legumes and some grains but still remain lower levels than animal-based protein. Additionally, plant-based proteins are slightly harder to digest and absorb more slowly than animal-based. As an example, chicken contains an average of 7g of protein in a 30gram serving compared to beans which require 65g for 7g of protein.

So Yaca! Yaca is unique compared to other fruits because it contains up to three times more protein than similar types of fruit. Where Yaca can yield more than 3grams of protein per cup, other fruits such as apples only contain 0.3g or mangos at 1.4g. Because of this unique structure, Yaca can form a texture similar shredded meat that vegans and vegetarians desire. However, it is important to note that Yaca is not a complete protein – meaning it is missing 3 out of the 9 essential amino acids to form building blocks for the cells in the body. So, to make it a complete protein I have created a recipe combining foods to make up the missing 3 essential amino acids, to enjoy a complete protein meal!

It is the young or unripen flesh or rags of Yaca that is often used as a meat alternative due to its neutral flavor, however in the recipe below I recommend using the fresh, yellow, sweet and ripened Yaca as this will yield the greatest nutritional profile and protein content. The riper the fruit the easier it is to digest the proteins and break them down to amino acids.

To select a ripe Yaca, ensure the following; it should have some brown spots, as this indicates full ripeness. It should yield a little when you squeeze it. Lastly smell the fruit – if it has a sweet smell, it is ready to eat. Use the flesh and remove the seeds from the pods.

Since we are in the land of Tacos try the recipe below with mushroom to make a complete protein. 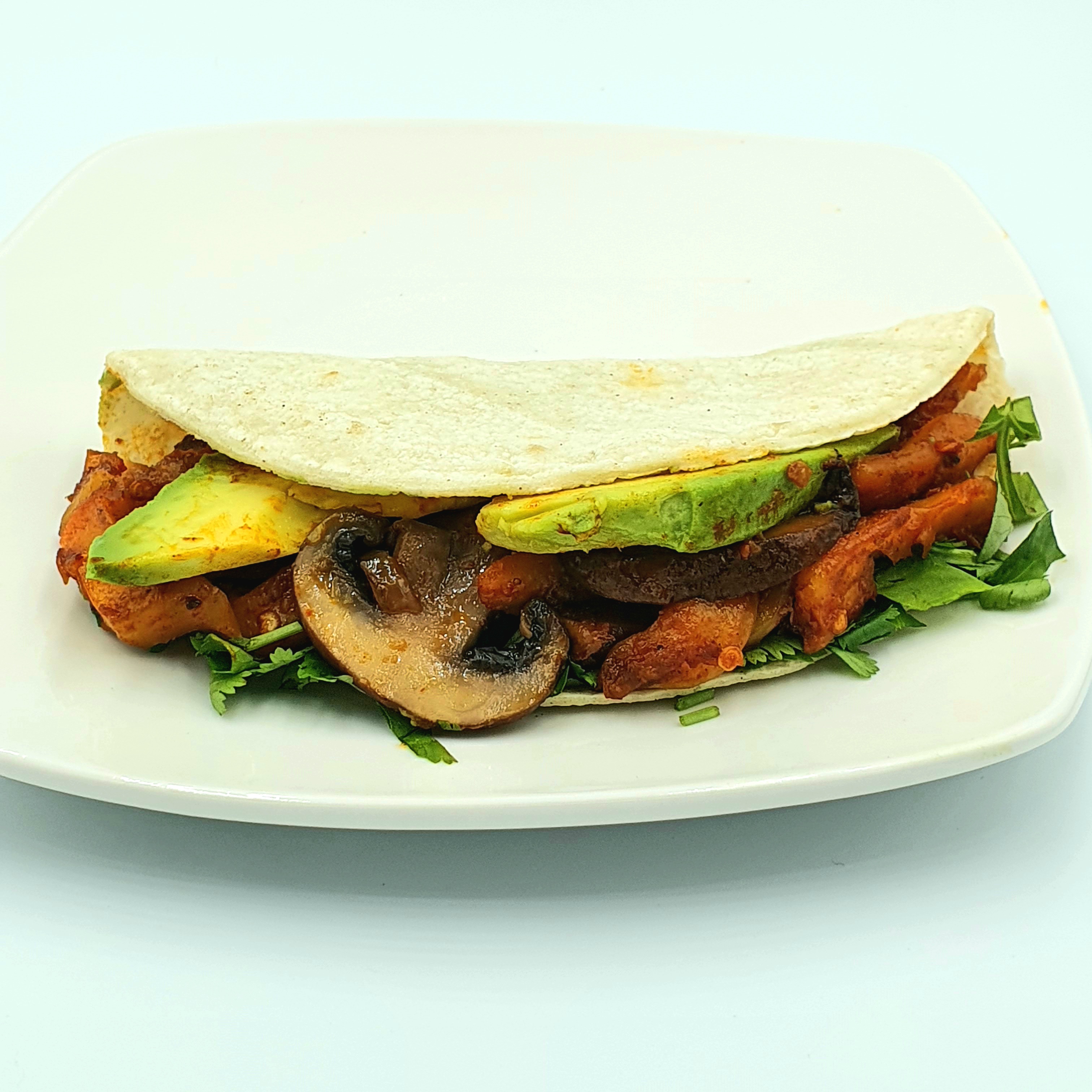 Tortillas are also needed for this recipe along with salsa, avocado, cilantro, and any toppings of your choice!

If you use the ripe Yaca, use the flesh around the seeds for a sweet taste, for a more bland taste use unripened Yaca and use the rags (parts around the seed flesh), this will give a more ‘pulled pork’ look.

Heat a little vegetable oil in a frying pan and fry the sliced onions with a pinch of salt until soft. Add in the sliced mushroom and fry on a medium heat until both start to brown a little, turn off and prepare the Yaca.

In a separate frying pan place some oil and fry the crushed garlic for a few minutes, add in the cumin seeds for a few more minutes, then the paprika and chilli powder, mix well. Shred the Yaca or cut into bite sized pieces and add into the spice mix, add a little salt and pepper to taste and coat the Yaca well. Add a splash of water and fry on a low heat for 10minutes, breaking up the jackfruit into smaller pieces.

Once cooked, place the mushrooms with onions on a small tortilla and the Yaca mixture, top with avocado or cilantro and your favorite salsa, enjoy the healthy alternative tacos!